In 2000 I co-founded the first Czech non-profit organization to train assistance dogs for health-impaired patients. We named it Pomocné tlapky o.p.s. (Helping Paws n.g.o.) and since then, over two hundred dogs were handed over to our clients.

When my husband Jim and I bought Barkley, a cute little Labrador puppy bred by Hana Pirnerová, we didn’t realize he would change our lives… and not just ours. In the spring of 2000, I received an unexpected phone call from her, explaining that her friends, the Tomášů family, had been training guide-dogs for years and now they’d heard it’s possible to train dogs for people using wheelchairs. She knew I had disabled friends, so I was her obvious choice for help.

I got on the Internet and soon realized these dogs are called assistance dogs or service dogs and can learn as many as 90 commands. They open and close doors, switch lights on and off, pick up items dropped on the floor, retrieve mobile phones, carry small items in backpacks, alert deaf people to sounds, even learn to alert their epileptic owners to approaching seizures. The list seemed endless, the job huge, but our American counterparts were very helpful in sharing initial information.

We received no encouragement at home in the Czech Republic, though. Everyone told us we were nuts, that we didn’t have a prayer of getting sponsors, that Czech disabled people would be unwilling to go through the necessary training and tests. Despite all that, we began a Pilot Project, training our first five dogs to prove that it could be done.

I prepared the paperwork for opening a non-profit organization, got all the stamps, wrote by-laws and coordinated volunteers. Helping Paws n.g.o. was then officially approved, in February of 2001. Being so busy, my translations were delayed and I soon realized that the trainers had completed training our first dogs without the American manuals. They only needed to know what the dog was supposed to do and took it from there. 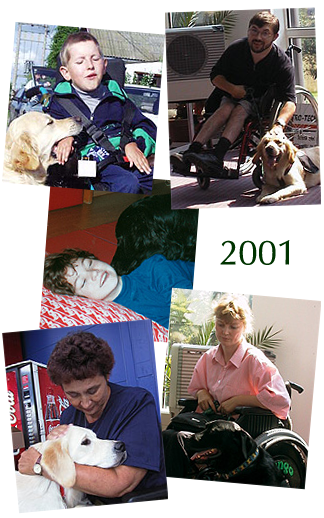 In May of 2001, our first four clients officially received assistance dogs and one social care facility received a fully trained therapy-dog for permanent use – all of them for free. The estimated value of this Pilot Project was about a million Czech Crowns (nearly $60,000), created by four people, plus a handful of occasional volunteers.

We never gave it a thought; we just did what was needed. Major thanks for this goes to my husband, who supported me during the first years when I worked for free, pretty much full-time. I gave over my director’s seat to Hana Pirnerová in 2002 and she proved to be an excellent fundraiser and director.

Making It Happen, Making a Difference

To say that all this makes me happy sounds like a cliche, but it really does. Helping Paws has grown into a strong organization of professionals, including an occupational therapist, psychologist, a fleet of puppy-raisers, three full-time trainers and one director, Hana, without whom it never would have happened. She once told me that back in 2000, it took her four months to get enough courage to pick up the phone and ask me for help. Nowadays, she knows how to ask for help and gets it.

Thanks to her fundraising efforts, Helping Paws have placed over 200 assistant and therapy dogs of the highest quality. They changed the lives of many more people through their network of dog-facilitated therapy volunteers. They also altered the lives of many people on the outside, who decided to contribute or help us. When I ask them about their motivation, I always get the same answer “I want to do something meaningful, something that will make a difference.” Then I realize, again and again, that they came to the right place – Helping Paws does make a difference, to all of us.

Thank you Barkley! Thank you all, guys!

Introduction of the organization with English subtitles.