Animals play a very important role in my life, both personally and professionally. So here are the icons of my life, the best friends of all… 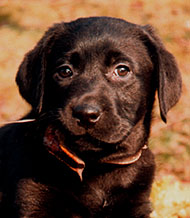 The ultimate and unforgettable pet of my life was a black Labrador named Barkley (1996-2010). He was a legend among our friends, family and neighbors and for good reason. Barkley had perhaps the kindest heart I’ve ever come across in a dog. I know what I’m talking about because I’ve worked with some 200 dogs in my projects and even our trainers agree that Barkley’s sensitivity and manners were just exceptional. He was a special soul.

Somehow he had his own portions of life that didn’t include us, because he spent summers (after we moved to Prague) with my parents at the cottage and because many of our guests took him on long walks in the mountains. Many people considered him a buddy for their own particular reasons. We haven’t quite recovered from his loss and, with our busy lifestyle, I think we won’t have another dog for a while. But we were graced with his presence and he will never be forgotten.

Here is his little page at his breeder’s website.

We first had a cat named Ciciolina, who disappeared in the woods near our house in the mountains after a few years with us. We then got two kittens from a pound, possibly sisters. We named them Google and Yahoo, because they were the ultimate search-engines. Yahoo then disappeared, so currently we only have Google. She spends each summer at the cottage, catching lizards and mice, sleeping, eating and exploring. What a perfect feline summer camp!

Then we had a cat named Emma that my gallery-mate found on the street in horrible condition. Emma was the star at our studio and had a tendency to fall in love with certain guests. It never occurred to us to look closer and we later learned Emma was a male. Renamed Emík, he spent his last winter with my parents and when he died, it inspired them to get a cat of their own, Emík II.

A month after our Yahoo disappeared at the summer camp, a lonely kitten wandered in from the village. He was named Felix, then renamed to Ivan, and he’s by far the friendliest cat I ever met. He and Emík II. spend their winters with mom in Prague and summers with our Google in the country.

Cats are simply plural. If you hear a noise in the kitchen, you just scream “Cats!” … and perhaps they stop their mischief or perhaps not – because they’re… well… cats.