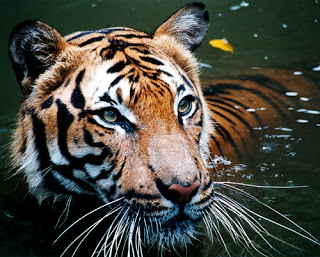 We’re fascinated by big cats. Ever since Joy Adamson’s Born Free in 1960 (and likely many times before), we learned about people who raised and lived among big cats … and somehow didn’t get eaten. By the way, Joy Adamson, who wrote about her experiences of raising a lion cub named Elsa in Africa, was born in Opava, Czech Republic … except back when it was the Austro-Hungarian Kingdom.

Over the last few decades, there has been much talk in the animal training circles about how to train animals through understanding their behavior instead of by fear-based methods. The internet became a wonderful resource for getting to know about people who did just that, did things that (to us mortals) seem unbelievable. I met a journalist who regularly spends time with tiger and lion trainers from circuses who are now developing animal-friendly methods, right here, in the Czech Republic. That’s very good news.

My friend who’s an incredible dog trainer says “you have to think like a dog” – easy to say, not so easy to do. And he does think like a dog (his wife would probably say more often than necessary). Dogs respect him automatically, he simply assumes his role as the pack leader. He’s quiet, patient, strong, straightforward, fearless and … fun! They all love this combination. It makes complete sense to me, that if you know the right combination and crack their code, you can communicate with big cats (or perhaps any other animals) in much the same manner. It’s a direct communication without language – right brain and body language.

Here a few people who did it. These videos circulate on Youtube and Facebook immediately provoking debates about whether they are hoax or Photoshoped. Well, I’d say that these people have no reason to do so. They love to do what they do and the developed the one thing most of us shut down – intuition.
————————————————————–

Kevin Richardson (born 1974) is an animal behaviorist and has done extensive research on native animals of Africa. He has been acknowledged into a pack of spotted hyenas and pride of lions. He works with hyenas and big cats such as cheetahs and leopards. He specializes with lions and runs the Kingdom of the White Lion facility in the Lion Park in Gauteng Province, South Africa. Known around the world as the “Lion Whisperer,” Richardson is also an author and film producer.

The one significant thing you notice watching Kevin is his fearlessness about getting scratched. He carefully protects his face, but you just know he must be accidentally scratched and bitten as he plays with the animals. If he was more self-protective, he would lack the confidence necessary for the interaction. This type of fearlessness is common to all the other videos as well.

Marlice Van Der Merwe is a conservationist living in Namibia, Africa. She grew up on her parent’s farm, Harnas, where injured wild animals were given refuge, and where she developed a close relationship with the indigenous Bushmen who live in the Nambia desert. She is one of the few white people to speak their language. She is now a wild life conservationist, protector of the Bushmen, farm manager, wife and mother, who has established her own wildlife refuge, N/a’ankuse, which means “God will protect us”. In this video Ms. Van Der Merwe (her married name is Van Vuuren) approaches cheetahs in the wild. What she is explaining, for those who don’t understand French, is that if you don’t run away from the cheetahs, and maintain eye contact with them, they won’t attack.

Tiger Temple, or Wat Pha Luang Ta Bua, is a Theravada Buddhist temple in western Thailand that was founded in 1994 as a forest temple and sanctuary for wild animals, among them several tigers. This is a particularly interesting case because it managed to raise both awe and resentment in Europe and North America.

The monks of Wat Pha Luang Ta Bua are obviously confident and keep their tigers well fed and raise them to tolerate tourist. Being a Prague resident, my hats down to anyone who tolerates tourists, more so to tigers who, unlike us, could get their peace in a minute 🙂 I don’t doubt the constant attention is annoying to the animals.

On the other hand, there is this thing called socialization. We have a complex socialization program for puppies that will later be trained for assistance dogs. Simply put “take them everywhere with you” we say to our puppy raisers. What you end up with is a highly adapting dog, tolerant and perceptive to people and immune to unexpected changes of situations. You end up with a cool dog that doesn’t jump up when accompanying a disabled person to a theater where there are sudden gun shots in the play. They simply have a different way of assessing situations.

When I saw the this footage of a tiger walking through a market, I thought – what happens if you intentionally socialize a big cat? And I don’t mean train, I mean socialize. Like our dogs, they ultimately become a very different kind of a big cat – a kind we didn’t have yet. It probably does take a Buddhist environment to ever do such social experiment as we see here. The official restrictions in the West would prevent anything like this from happening. The occasional big cat we see “walked” in Riegrovy sady among other pets raises considerable controversy. And, in my view, rightly so.

Having been to Thailand, I think I know a bit about the general attitudes toward animals and this fits the picture – both in the good and bad aspects of it. Sure, these tigers became a tourist attraction, but so are butterfly farms, elephant training centers and coconut-harvesting monkeys. But these places feed not only the monasteries, but often entire villages. They also help preserve the tradition of working and coexisting with animals, a tradition that is often no longer economically feasible without tourism. On the other hand, the level of trust and understanding on parts of the monks and the general public is … well … very Buddhist … and admirable.

We still have so much to learn …